I’ve learnt a lot from my week at ESTEEM about the inner workings of a charity and the different job roles. I am particularly interested in the media aspect of it and I’ve gained a lot of knowledge of audiences and how to best target them through social media. I’m really grateful for this experience and I think a lot of the skills I’ve learnt this week I will utilise in my work life/career in the future. 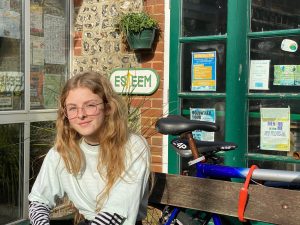 My first day with ESTEEM was mainly centred around induction and getting comfortable with the environment. I learned where the fire exits, points and extinguishers were and other important places within ESTEEM. After my lunch break I completed the Morrisby careers test. I enjoyed receiving the results which told me what career paths would be most suited to my personality and strengths.

To begin my second day I was introduced to google docs, Hootsuite and Canva which are all regularly used here within ESTEEM. Then once I had become comfortable with these I was tasked with redesigning a social media post for their Wednesday drop in on Canva, I then scheduled these on Hootsuite making edits to the original. In the later half of the day I was talked through ESTEEM’s approach and audiences and how this differs from each social media. Lastly, it was back to Hootsuite to schedule more posts for esteems social media based around their raffle last year.

It was a much later start on Wednesday (3pm-8pm) so I could attend the drop in held from 6pm to 8. I knew today I’d be doing a video interview so to begin I watched a few videos YouTube videos from ESTEEM’s page to get a general idea of the type of questions I’d be asking, I then created my own. Then I filmed the video interviews and made a few notes on where it should be edited. After this, people started arriving and it was time for the drop in. 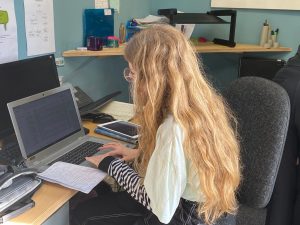 On Thursday, I begun by creating a post on Canva for a job opening as a cook at ESTEEM, once I designed this and made an adapted square version for Instagram I went to Hootsuite to schedule this for Instagram, Facebook and Twitter finding the best time to post for the audiences engagement. Making sure to include the what, why, when and how in each caption, to make it easy for people to apply. After posting this on some Facebook groups I started to schedule an AGM post.

I came in at 10 on Friday to sit in for an hour of resilience training. I found the discussions that took place in the meeting very interesting and insightful as it differs from any environment I’ve previously been in. Next, I designed another cook post featuring pictures I took from the kitchen earlier, another AGM post so it would appear multiple over the month in order to make it effective and a photo from Resilience training.

We track how people interact with our online web content and resources, and some of that tracking involves storing cookies on your device. By continuing to use our site you accept that you agree to this. For more details see our Privacy Statement.